I didn’t want to get up that morning. My room was cold and I had created a warm cocoon in my bed. It was raining outside and I dreaded the long walk to university. But there was something which pulled me out of my warm nest. It was the prospect of going to a Japanese bakery after class.

I love Japanese food, which is a commonly known fact among my friends. I had been told by a few of them that a new Japanese bakery called WA had opened up near our university. I was super excited to go and try it out with them. So we planned, after one of our classes to go see how it was.

As we stepped inside the bakery, the first thing we noticed was the smell of freshly made bread and coffee which made my mouth water in anticipation. It was like stepping into my own personal heaven of sweet treats. The bakery was very modern in design, with large windows and a pattern of light grey mismatched tiles on the walls which gave it light airy feel and made it more welcoming. There was a long glass counter displaying a selection of colourful, finely decorated cakes and fresh breads. They didn’t just have matcha flavoured things, but also curry buns, melon bread (bread with cookie dough on top), strawberry shortbread, Mont Blanc, choux trio (Chou pastry with three types of cream) and so much more. With such a large choice we had trouble deciding what we wanted and spent ages staring longingly at the cakes.

If anyone was watching, you they would have guessed we were culinary students as we spent at least five minutes marvelling over the wonderful cake decorations and then ten minutes taking hundreds of photos of our food, all at different angles.

I had trouble deciding which one item I wanted to get, so finally I gave in and got two. I got a golden curry bun and a black sesame cheese cake. To drink, I chose sweetened sour plum tea. I started to eat the cheese cake before the curry bun as I thought the flavour of curry would intrude on the more delicate tastes of the cheese cake.

The cheese cake was splendid. Crushed black sesame seeds in the base, which provided the lovely warm taste you get when you have toasted something. As I have said on a previous post, cheese cake is the food that I turn to when I am feeling blue, so it was perfect on this cold grey day with its toasted taste giving me a warm feeling. The main body of the cake was vanilla flavoured, which helped to balance out the black sesame taste. It was topped with white chocolate petals. I am normally not a huge fan of white chocolate as I find it too sweet, but with the rest of the cheese cake, it worked well. The chocolate blended with the vanilla and helped to elevate the black sesame to new levels by highlighting its slight bitterness against the sweetness. 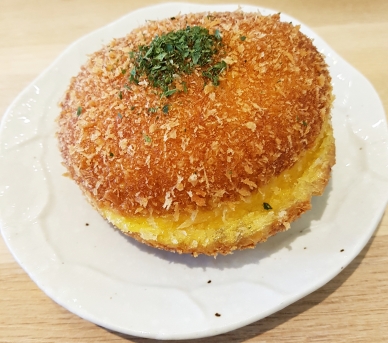 Next was the curry bun. A dark gold in colour and smelling slightly of curry. When I broke it open, the bun was filled with real curry. I had thought that it would just be a flavouring in the bread but this was real curry with carrot and potato chunks and meat. The bread itself was surprisingly light and fluffy, instead of heavy and oily, which is what I thought it would be like. It had a rich and deep flavour of curry, you could tell that it had been freshly made, not premade in a factory.

I have always thought that Japanese foods are some of the best in the world, but I had not realised just how amazing they are. Even Japanese cakes and breads are more like little works of art that you can eat. Art you can admire with your eyes and your mouth. This is just another addition on my growing list of reasons why I need to visit Japan and stuff my face with all their amazing food. For the moment I know now to motivate myself to get up for early university classes on cold rainy mornings. Just go to the Japanese bakery!

I bite my spoon and it was delicious!
Cool cafe decoration of silver chocolate moulds that actually has something to do with what is being served and sold. Some very intresting designs. Can I get a chocolate fish for Easter this year?
Managed to get the reflection of the silver chocolate moulds reflected in the drinking chocolate.
It's ALL chocolate! I can eat EVERYTHING! This is the dream! No washing up required. .
Cake! Dense chocolate and coconut vegan cake. And has been sweetened using banana which I could stilll taste. So yummy.
Ginger green tea that helps sooth the digestion of a great burger. And not too sweet which is always great as I can really enjoy the flavour. .
Follow Rassasy on WordPress.com
Loading Comments...
%d bloggers like this: